At Georgia Mountain Maples, a lot goes into our maple syrup. It takes a team of dedicated people, a healthy sugarbush, and the best equipment to transform fresh maple sap into pure maple syrup.

Our syrup is the product of:

Sap doesn’t naturally run uphill. Our first goal at Georgia Mountain Maples was figuring out how to get our sap up and over the mountain. Determined not to use trucks to move it from one side of the property to the other, we successfully installed pumps and miles of pipe to transfer our sap directly from the tree to the sugarhouse. All of the sap runs into the main collection tanks, right inside the sugarhouse. During sugaring season, we’re constantly walking the lines and making sure the sap is flowing and moving efficiently.

To the holding tanks…

We’ve invested in high-capacity operations to minimize the processing time between tree and bottle. From the main pump station, the sap runs into one of six concrete holding tanks, which collectively hold 123,500 gallons of sap. The tanks are built into the foundation of the sugarhouse, so the frozen Vermont ground keeps the sap nice and cool.

To the reverse osmosis machines…

From the holding tanks, the sap filters into our reverse osmosis machines. These machines save fuel and energy, and add efficiency to the sugaring process by cutting down on the amount of time our sap waits to be transformed into maple syrup.

Fresh sap is about 2 percent sugar and 98 percent water. Reverse osmosis speeds up the process of reducing the saps’ water content on its way to becoming syrup.   Reverse osmosis forces the sap through a semi-permeable membrane, removing at least half the initial water content. 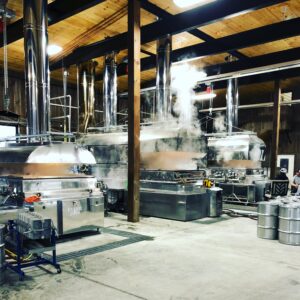 At the end of the reverse osmosis process, the saps’ sugar content is 19 percent. The job of the evaporator, which is essentially a big frying pan, is to keep boiling it down. Our Tornado Natural Gas evaporator fills up nearly half of our 12,000-square foot sugarhouse, enabling us to boil more sap at a time, resulting in a fresher end product. When the sugar content reaches 66.9 percent, then we’ve made maple syrup. 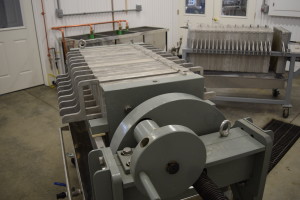 To the filtering room…

After the syrup is “drawn off” the evaporator, it’s sent to the filtering room, where it gets sifted through a 20-inch filter press. We’re filtering out niter, or “sugar sand,” a naturally occurring mineral from the maple tree that precipitates out during the boiling process. At each step, we take samples of the syrup to help us in the grading process later on. 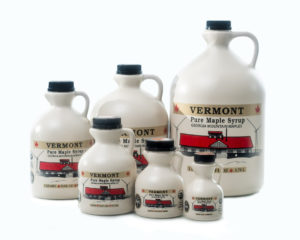 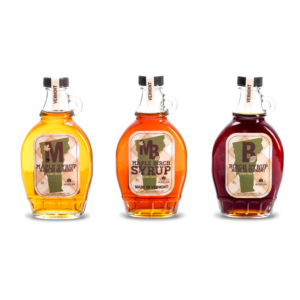 Over the course of the season, we’ll make a range of maple syrup grades, from light to dark. A new grading system unveiled recently in Vermont is designed to help consumers distinguish between the different grades, in both color and taste. Some people prefer the delicate flavor of the lighter syrups, while others like the strong maple taste of the darker varieties. Sometimes it just depends on how it’s served. We enjoy our maple syrup in our tea, muffins, apple crisps, beef stew, and a hundred other recipes. 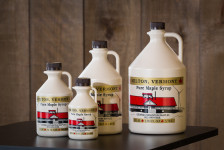